Choosing to be “Unoffendable”. 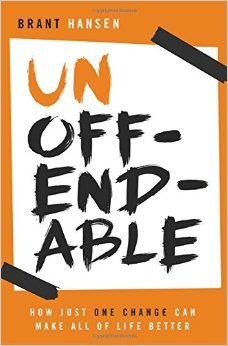 I read the book Unoffendable by Brant Hansen this past month and I highly recommend it. It really captures the outlook on life that I intend to have.  Hansen articulately expresses ideas that I’ve thought about quite a bit over the years, but never fleshed out on paper.

Here are my thoughts about being unoffendable, along with some great quotes (in italics) from the book.

We have to suspend our judgment of others and instead give people the benefit of the doubt.  When we judge the motives of the person who cut us off in traffic or who has failed us in some way we set ourselves up to becoming angry and offended.

“We simply can’t trust ourselves and our judgment of others…And since we don’t know, let’s choose ahead of time: we’re just not going to get offended by people.” (page 16 )

If we had a good understanding of our own weaknesses and shortcomings, we’d be less likely to take offense at others.

“When you’re living in the reality of the forgiveness you been extended, you just don’t get angry with others easily. I suspect our sense of entitlement to anger is directly proportional to our perception of our own relative innocence.” (page 65)

We should quit trying to change people and rather treasure them.

“I don’t control anyone, because that’s God’s job. That’s his deal. I can just enjoy and love people. As I keep saying, I wish I would have known this sooner. I wish I could have seen the entire redemptive, narrative arc of the Bible.” (page 84)

We need to trust God rather than expect others to fulfill all our needs.

We need to give up our ego’s demand for vindication.

“It means if someone has done something to wound me, I have to endure a second hurt, one that feels like a second wound.  [just like Jesus did]  My sense of justice says the person who hurt me should pay: but with forgiveness, it’s the forgiver – the victim – who must pay again.”  [and that’s a good thing!]  (page 140)

“The cross simultaneously stands as a constant reminder of [Jesus’s] willingness to pay the bill, and as an indictment on us when we are unwilling to do the same for others.” (page 141)

“Real humility lies in self-forgetfulness. Few want to hear this but it’s true, and it can be enormously helpful in life: if you are constantly being hurt, offended, or angered, you should honestly evaluate your inflamed ego.”  (page 184)

“Self-forgetfulness is not about mystically wishing myself into non-existence or pretending I’m meaningless. It’s just the opposite. Self-forgetfulness is what happens when we’re emotionally healthy. Its remembering that God is my defender, his opinion is what matters and whatever my offenders are doing to me, I’ve done to others as well. And God has forgiven me I simply must forgive in return and forfeit my right to anger.” (page 194)

Living unoffendable results in a life of greater joy.  Focusing on how much God has forgiven you while focusing less on the disappointments of others is so less stressful.  It’s a better way to live.

This  concept of being unoffendable became part of the life resolutions I wrote years ago.  Number 20 reads: “Resolved to never take personal offense at anyone, knowing that given the same circumstances and apart from the grace of God I would have treated me likewise.”