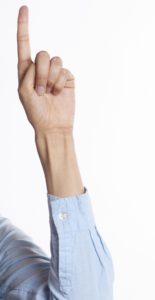 Last night, while sitting in my Lazy-Boy chair, I said those startling words to our daughter, Lexi.  My wife, Cindy, not realizing I was joking, called me out for my rudeness.   Lexi just laughed and brought me the yogurt.

What??  Many people would find the conversation I just described confusing.  What was startling about my words and what made it a joke?  Let me explain.

One of the foundational principles of our household has always been respect for one another and one basic way to show respect is by not demanding things.  None of us feels honored by being ordered around; being commanded by others robs us of autonomy and self-worth.  The stakes are high:  those made to submit to oppressive controls either become bitter toward authority or they become helpless victims.

In contrast, making polite requests of one another, avoiding commands, and using enforceable statements are good methods of building up one another, cultivating trust, forming confidence, and avoiding any abuses of power.

So, as soon as our kids could talk, we implemented a “no commands” policy.  The expectation was that if you needed something from someone else, you must do three things:  1.)  put it in the form of a question, 2.) include the word please, and 3.) say it in a pleasant tone of voice.  As parents we modeled this back to our kids, treating them with the same respect as we required of them toward us.   It was a policy that communicated that everyone matters (parents and kids) and that it’s never ok to presume upon others.  Favors aren’t owed, they are favors.

That’s what made my command, “grab one for me too!” so outlandish.  In our home, we would never speak to each other that way.  What made it a joke was that I was acting the part of a dictator, something completely foreign to the way we normally interact with one another.  Lexi got the joke, took no offense, and brought me the yogurt.  “Yes, your majesty.”

I’m not saying parents should never use commands, but I am suggesting that their use should be rare and it should be attention-grabbing when they are used.  For example, during a snowstorm one Saturday night, I called Cindy and said these exact words:  “Get in the car and drive to Camp Wapsie right now.”  I violated all three of our household rules:  it wasn’t polite, it wasn’t a question, and I didn’t use the word please.  Cindy instantly knew this had to be an emergency and, rather than take offense, she got in the car and drove the 20 miles to Camp Wapsie in a snowstorm.   [The emergency?  We were desperately trying to get 100 kids home from a retreat before the blizzard got too bad, but the bus key had gotten lost in the snow.  The only spare key happened to be in Cindy’s car!]

You can get away with an occasional command if you use them only when necessary.   Screaming “Get out of the street!” is the right thing to do when your kid is in the path of an oncoming truck;  it would not be a good time to say please and use a polite tone of voice!  The urgency justifies the suspension of etiquette.   In fact, a rare, out-of-character command will draw attention much better than the constant issuing of directives.  Too many parents, however, have formed the bad habit of ordering their kids around, which will likely result in resentment and rebellion.

My advice?  Pay attention to how often you use commands in your communications with your kids.  Taking more care with the choice of our words is important.  Here are some simple adjustments that might help.

Stong-willed kids.  In my observation, strong-willed kids are usually commanded more, but it only exacerbates the problems.  Making specific demands draws a battle line in the sand, a battle that your strong-willed kid will be very determined to win.  Try to find alternate ways of getting them motivated other than telling them what they have to do.  Erase battle lines as much as possible and look for ways to influence rather than control them into wise choices.  Some battles are needed–most are not.  Choose your battles wisely and be sure to major on the majors.

Toddlers and those with developmental, behavioral or mental disorders.  Admittedly, commands will be more necessary for this population.   The “no commands” philosophy works best with those who are rational and reasonable and who have the capability to think about their actions and consequences.  It makes sense that if kids are not able to regulate their own lives, they will need others to do it for them.  However, as they become capable of self-regulation, parents should reduce controls and commands accordingly. This will give them increased dignity as they are given the opportunities to make choices of their own without being told what to do all the time.