Why the Starbuck’s cups would have offended me. 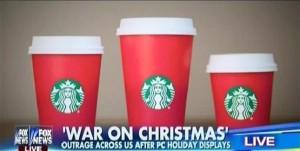 Recently the Starbucks “red cup controversy” made the headlines as it was purported by some to be a “war on Christmas”.  I personally think it was mostly a publicity stunt, as I know of exactly ZERO Christians (and I know a lot!) who were concerned about it.

But it does remind me of my own journey.  Until a few years ago I too might have been offended by such Starbuck’s cups — along with other Christmas trappings that exclude any mention of Jesus.  So for those who haven’t heard my story, let me share what brought me out of Grinchiness.

Anyone who has been around me this Christmas knows that I’ve had quite a change of perspective with regard to Christmas. For the past couple of years I’ve had this ever increasing negative attitude, bemoaning the secular “X-Mas” along with its assault on the spiritual “Christmas.” After all, Santa is spelled with the same letters as Satan!

I was disturbed at how the true meaning of Christmas (Jesus’ birth) is so often obscured by frivolous holiday trappings (decorations, ornaments, trees, the obsession with materialism, and of course, Santa). They’re taking Christ out of Christmas!

My attitude hit an all-time low in early December [2007] when I found myself at odds with my own family. They had the audacity of wanting me to join in the annual decorating of our home, setting up our tree, stringing the lights, etc. My preference was to throw the wicked tree in the recycle bin and go to my room to read the Nativity story instead!

Fortunately, my friend Steve Duffy sent me an email just in the nick of time (no 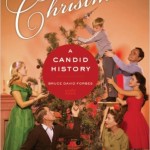 pun intended). It was a 17 page summary of a book on the history of Christmas. I was captivated — to the extent that I immediately bought the book and absorbed myself in it.

The book, Christmas: a Candid History, by Bruce David Forbes, a professor at Morningside College, put it all in perspective for me and transformed my attitude completely. I recommend it for any of you remaining Scrooges or Grinches out there. Here are the things I came to understand.

All these facts helped me realize that my thinking about Christmas was skewed. I learned that there’s nothing inherently wrong with enjoying a winter “holiday” with all it’s cultural trappings. And I learned that “true meaning of Christmas” wasn’t predominantly about Jesus’ birth at all. Instead of looking at the glass as half empty, I’m now looking at it as half full, rejoicing at how much Jesus remains a part of an otherwise secular season.

I rejoice that (for now anyways)…

• The name “Christ” in Christmas is still largely a part of the our holiday culture.
• Christmas carols, some clearly proclaiming the gospel message, have endeared themselves to our culture and are commonly enjoyed in public stores, holiday concerts, and on secular radio.
• Nativity sets, reminding the world about the incarnation, are commonplace and culturally acceptable.
• Jesus is thought about and talked about more during this season than any other time of year.
• TV and news specials about Jesus, Bethlehem, etc are common and generally positively portrayed.
• Church attendance at Christmastime has become a cultural family tradition for many–even the irreligious.
• Charity and unselfish giving are great values during this season—affording opportunities to share about God’s generous nature.

Since I stopped being a Grinch about Christmas eight years ago, I can honestly say that I thoroughly enjoy the holiday season, red cups and all!