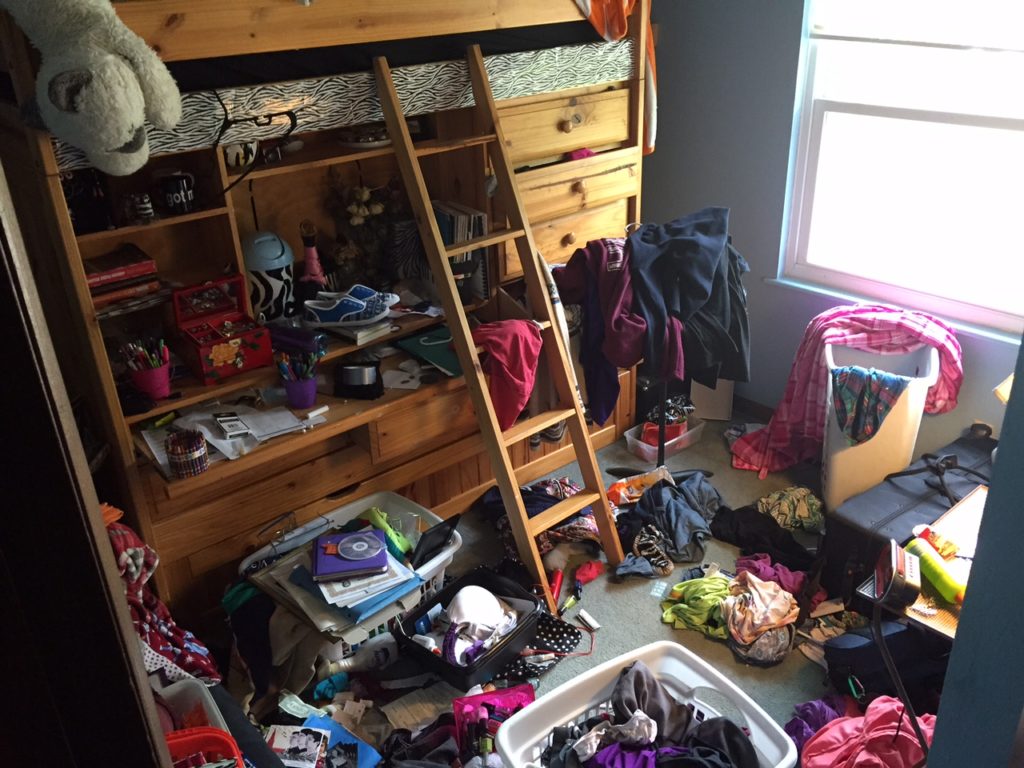 This is an actual photo of one of our children’s bedrooms.  I won’t mention which child it was to protect Lexi’s identity.

In my previous post, I talked about how parents need to determine which household expectations are essential and which are optional.   In this post I’m going to share two of our “Minors” that may surprise you.  But before I do, please note that I’m not suggesting that our “Minors” should be yours.  Every set of parents needs to determine what they can live with and what is necessary for the well-being of the family and sanity of the parents.   That said, here are two of our “Minors”…

BEDROOM TIDINESS.   We chose to make bedroom tidiness a “Minor” in our home.  We opted to never have a battle over the condition of our kids’ rooms.   We gave them the privilege and the responsibility to organize and manage the stuff in their rooms however they wanted.  The only stipulations were that there could be no dirty dishes or food crumbs left in the room, and any dirty clothes they wished to be laundered had to be put in the hamper in our bedroom.  Other than that, they had complete creative control over the condition of their rooms.  And our girls were creative!

[It’s important to note that this rule –or lack thereof — pertained only to their bedrooms.  They were still expected to keep the common areas of our house picked up and had to take care of any messes they made throughout the house.  Keeping our common living space picked up was a “Major!”]

CLOTHING CHOICES.  We also chose to never have a battle over clothing with our girls (as long as they were modest).   From a very young age (3 or so) we let them choose their own outfits and only rarely would we regulate what they wore (e.g. family pictures, holiday attire, weddings, funerals, etc.)  This meant that we sent them off to school and church wearing what they felt like wearing, which may or may not have matched the fashion etiquette of the day!   We figured it was good for them to choose their attire as a way to express their individuality.  This encouraged them that it was ok to be themselves.  As they grew older and more aware of social norms it also forced them to make decisions on how “conforming” to their peer group they wanted to be.

Let me illustrate this “Minor” with one of my favorite stories about Bren.*

It was a blizzardy, mid-winter Sunday morning and church should have been cancelled, but wasn’t.  I had gone ahead to church already, but Cindy was still at home getting herself ready with our three-year-old daughter, Bren.   Bren had chosen her church outfit for the day: a dressy plaid skirt, a red, tattered, Micky Mouse sweatshirt, and flipflops!  Making mention of the frigid temperatures and pointing out the blankets of descending snow outside, Cindy advised Bren that it might be a better choice to join her in wearing boots rather than flip-flops.  But Bren’s mind had been made up — she was determined to wear those flip-flops!

Rather than engage in a potentially lengthy and emotional battle with a strong-willed child over footwear, Cindy wisely decided to drop the issue completely, and began loading up the car and heading to church.

The trek through the snowy church parking lot to the front door provided the perfect teachable moment for Bren.  By the time they got inside Bren’s feet must have been absolutely miserable, although she tried hard not to show it.

One thing we do know, however:  never again did Bren choose to wear flip-flops in a blizzard!

So what was Cindy’s biggest challenge that cold morning?  It wasn’t Bren or her footwear choice.  It was the awareness that other moms might judge her as being a bad mom because she allowed her three-year old go to church in a blizzard in flip-flops.   Her concerns were well founded — in fact, just recently, a woman admitted to having done just that on that fateful morning.  But rather than feel guilty, Cindy knows that she did what was best that day:  avoiding a needless battle, letting Bren learn from her mistake, and arriving at church in a joyful mood!

I couldn’t agree more!  Now read the Final Post in this series on Majors and Minors.

[Note: flip-flops in the winter was a “Minor” in this case because it only involved Bren having to walk across a snowy parking lot.  If she would have been walking to school or watching a parade for an hour, that would have been a different scenario.   Having to amputate frostbitten toes pushes the issue into the “Major” category!]

* the stories and photo above are used with my kids’ permission!